There is only one way to explore Old town Quito: on foot. And let me tell you one thing, it probably is more exhausting than you might have thought. First of all, because Ecuadors capital is at an altitude of 2850 meters and you feel it at every small step. But the attractions of the Centro Historico are even more breathtaking. In fact, Quito was the world’s first city to be declared UNESCO’s World Cultural Heritage Site. Come along for a walk through Centro Historico! 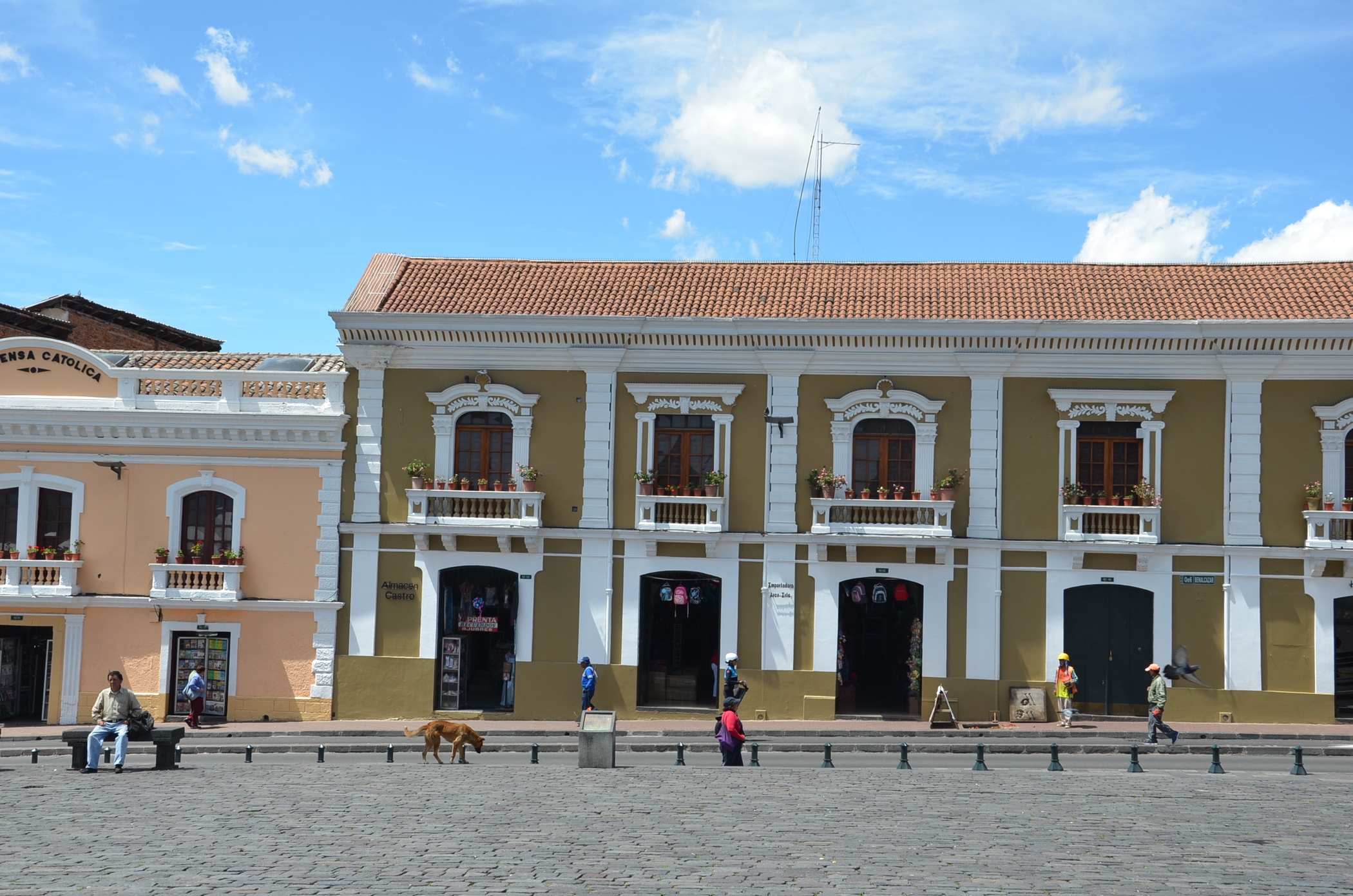 My walk through old town Quito starts in the most famous alley of the Andean metropolis: The Calle La Ronda, a narrow, cobblestone street full of colorful and already half slate houses which is a charming reminder of the Quito of former times. 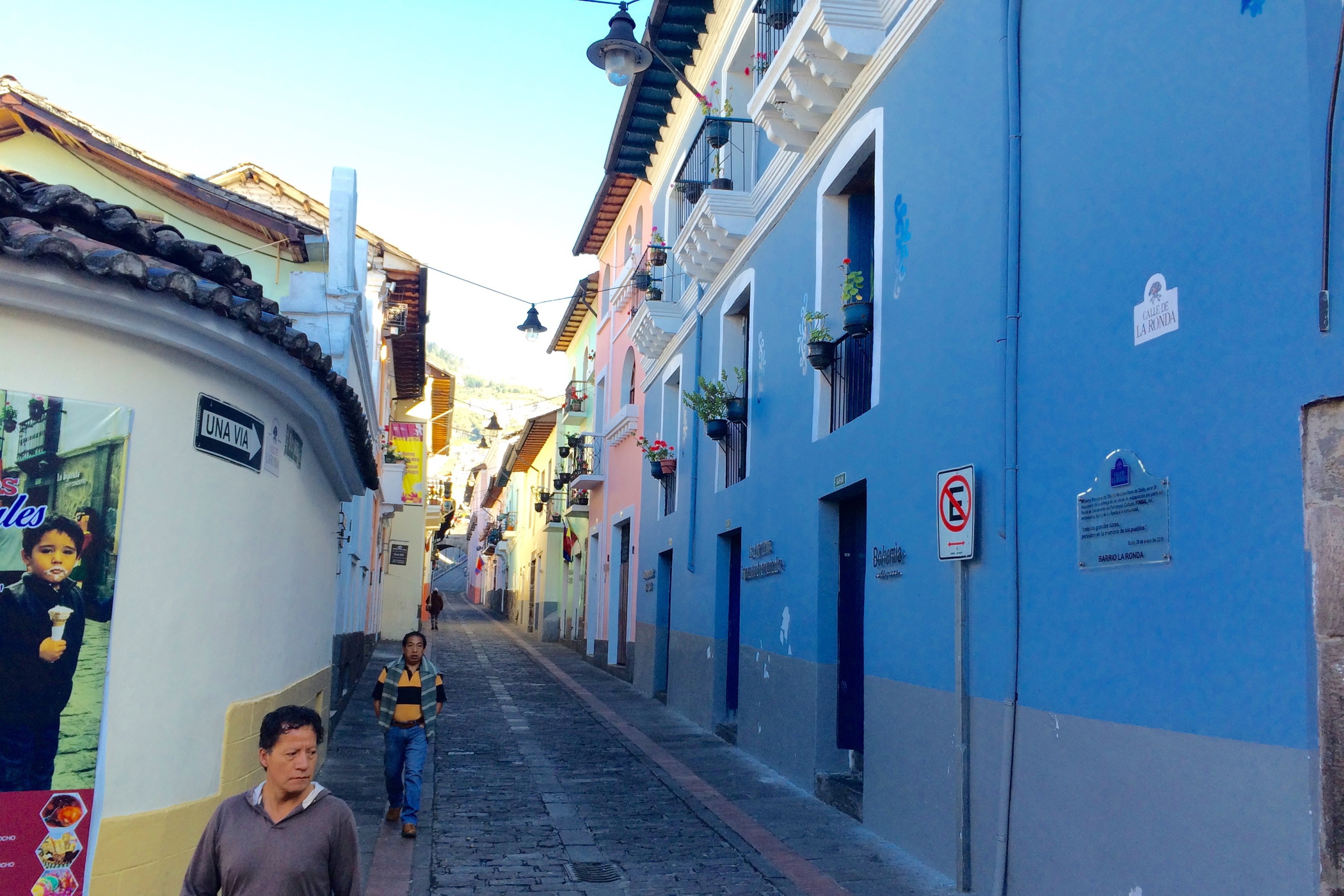 Formerly the center of craftsmanship, the Calle La Ronda today is a well-restored tourist attraction and a pedestrian area filled with shops and workshops, where people are still busy working on the traditional production of hats, honey, chocolate and other local products just like in the old days. Extremely touristy, but definitely worth a visit with the grace and elegance of a bygone era.

The picture is deceptive: Via Guayaquil in historic old town Quito is usually crowded with cars.

The streets of Quito have been created like a chessboard. Maybe that is why it feels pretty easy to find my way in them. My path leads me along the busy Via Guayaquil, where I pass shoeshine boys on the roadside tirelessly waiting for customers. Their facial skin seems equally well tanned from the sun, such as the leather shoes, which they intend to brush well. Also I pass dozens of elderly women on the crossing who advertise clementines and tomatoes, while trying to be louder than the constant honking of the taxis.

Manzana anyone? One of the vendors in the bustling streets of old town Qquito.

Then I realize that with each step not only the noise level is changing. My heart beats faster and at a stroke affects the city suddenly seems much bigger, louder and more crowdy than in the cozy La Ronda. I turn to the left and my pulse lowers again. 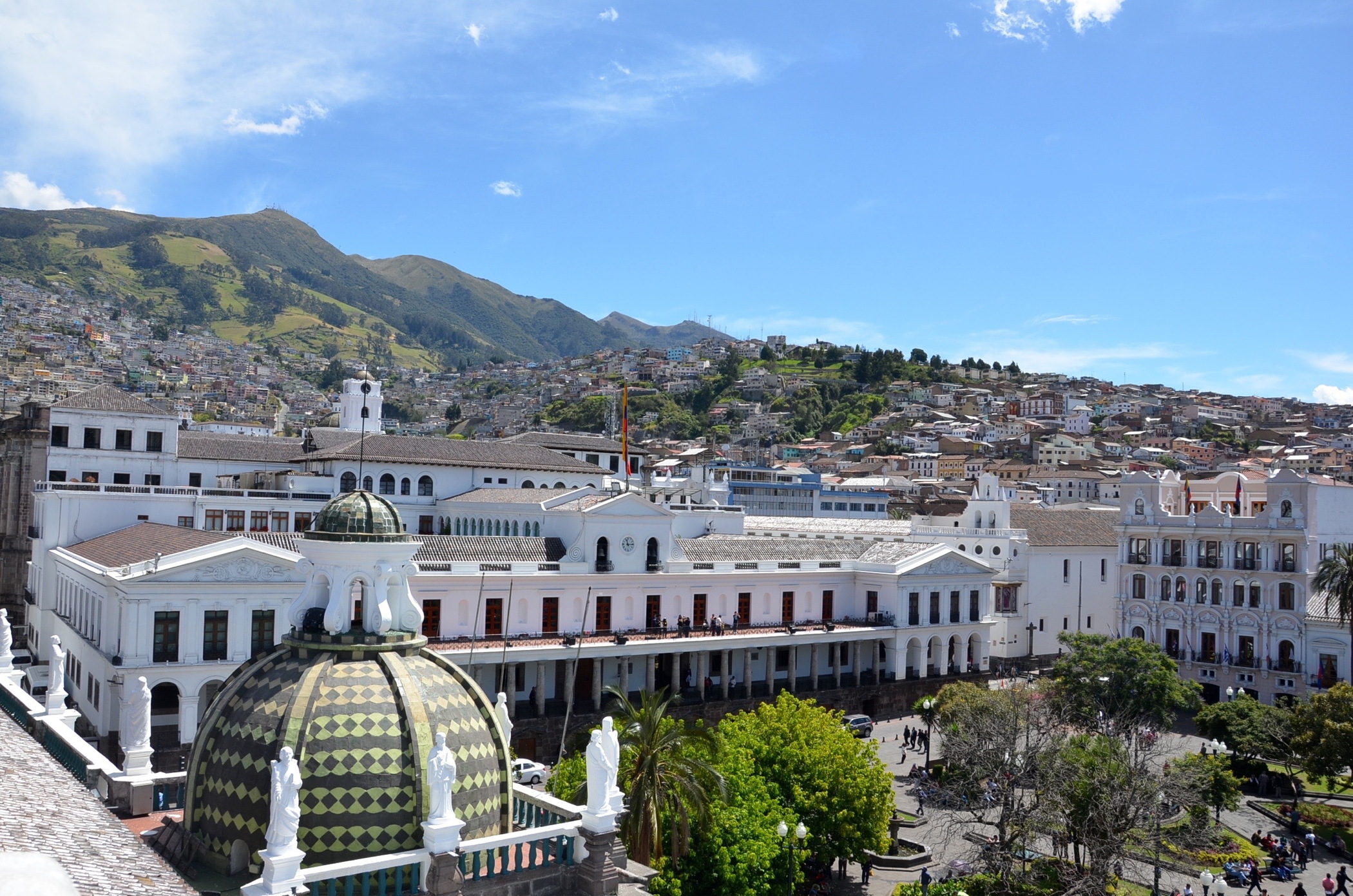 Meeting point of all ages: the Plaza Grande in the historic center of Quito.

Suddenly, I am standing on Plaza Grande, the Independence Square with the famous statue of the Virgen Apocalítica standing in the middle. The park-like area is surrounded by the Government Palace (Palacio de Gobierno or Palacio Presidencial), the Archbishop’s Palace (Palacio Arzboispal), the Cathedral (Catédral) and the Town Hall (Municipio).

Despite its central location this place with its gorgeous flowering trees seems to be quite relaxed. What you find here is a healthy mix of all ages. Children playing between grey old men, mothers sipping their café con leche loudly gossiping in the adjoining café and a military band is playing some songs. 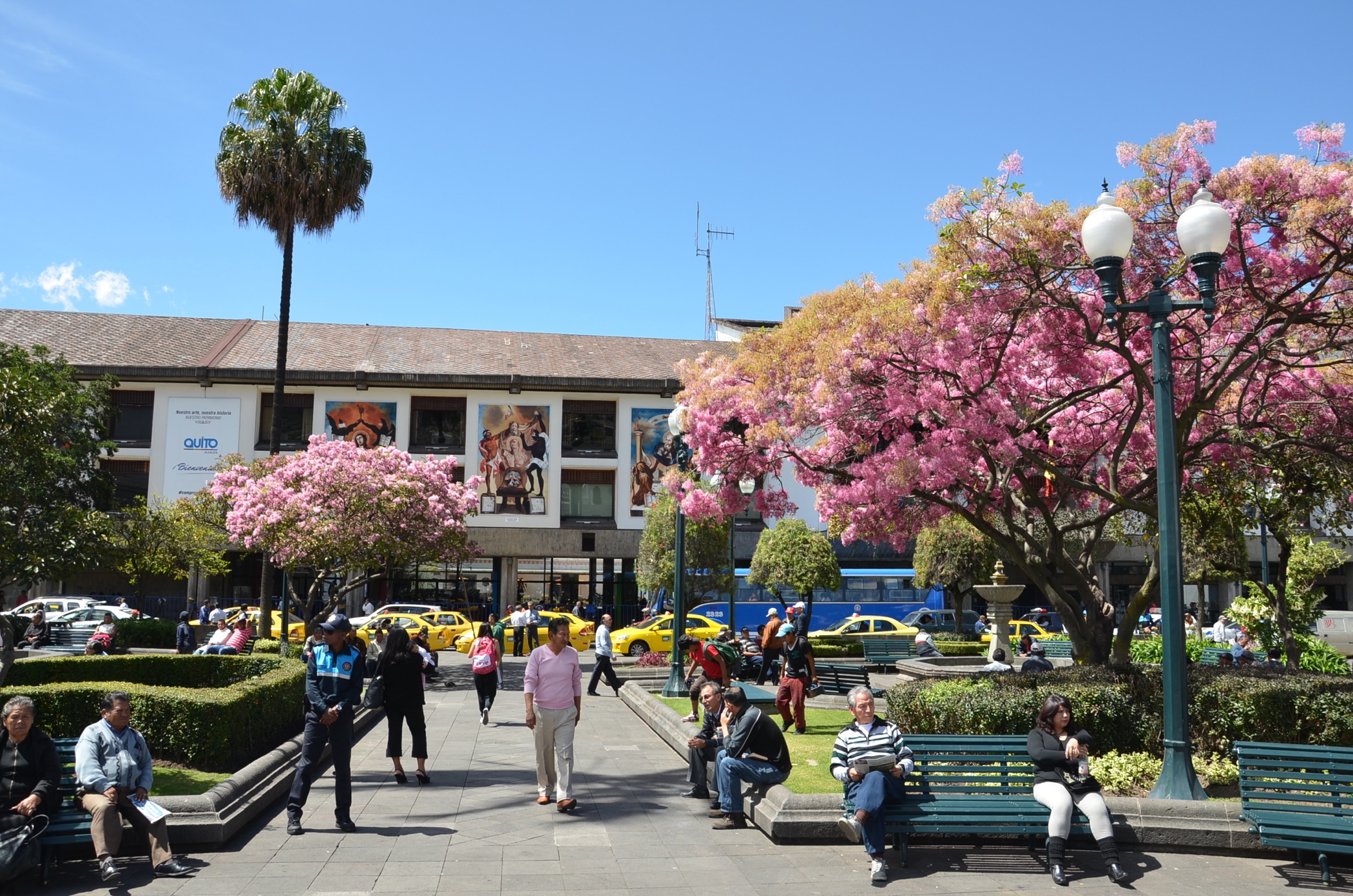 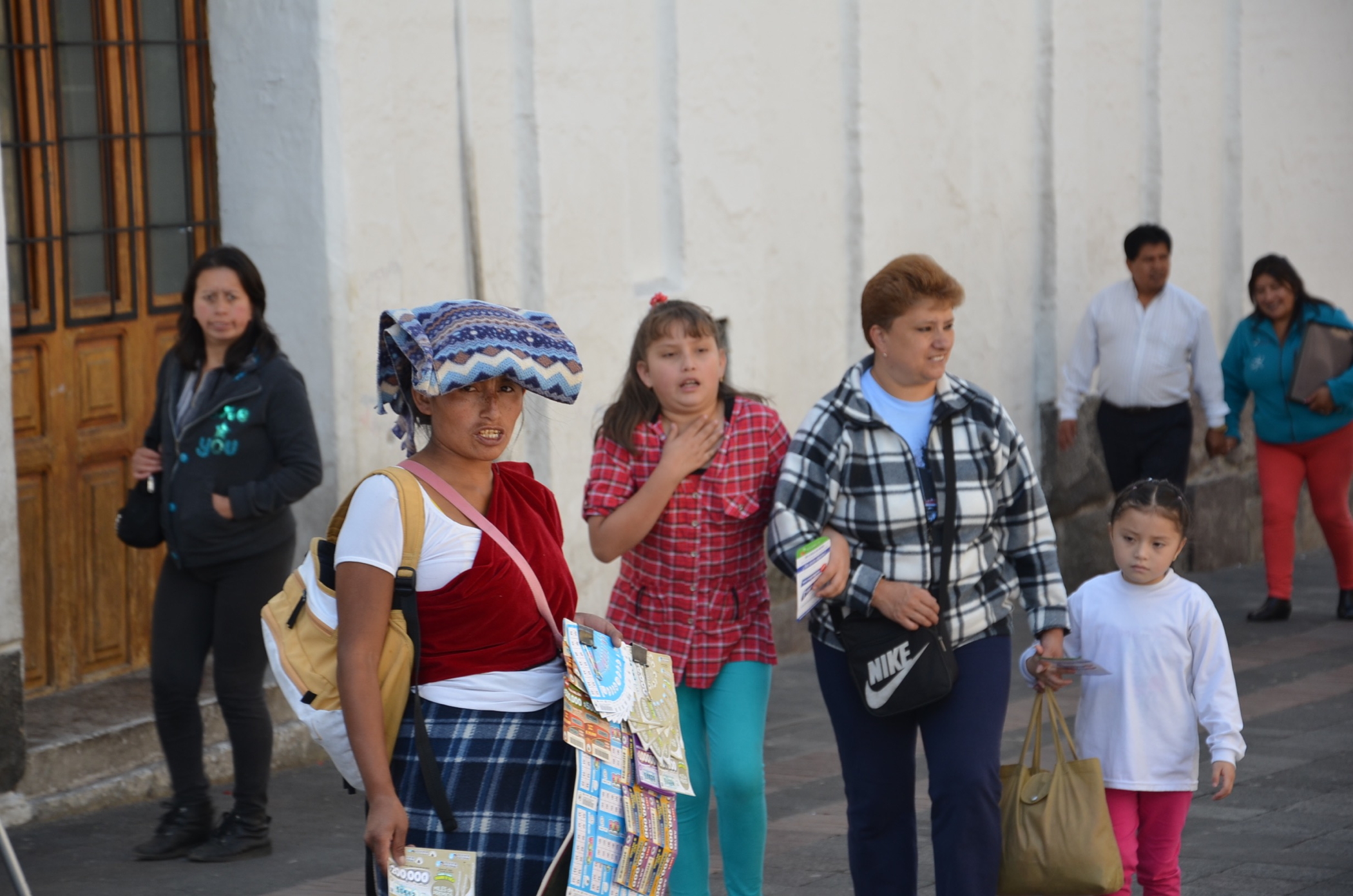 Quite photogenic: the pink flowering trees at Plaza Grande in Old Town Quito, the Centro Historico.

Somehow the whole scenery has something quite life-affirming. Nevertheless, after watching for a while I make my way further through the crowds and find truly rest at last just around the corner in La Compañía de Jesús. 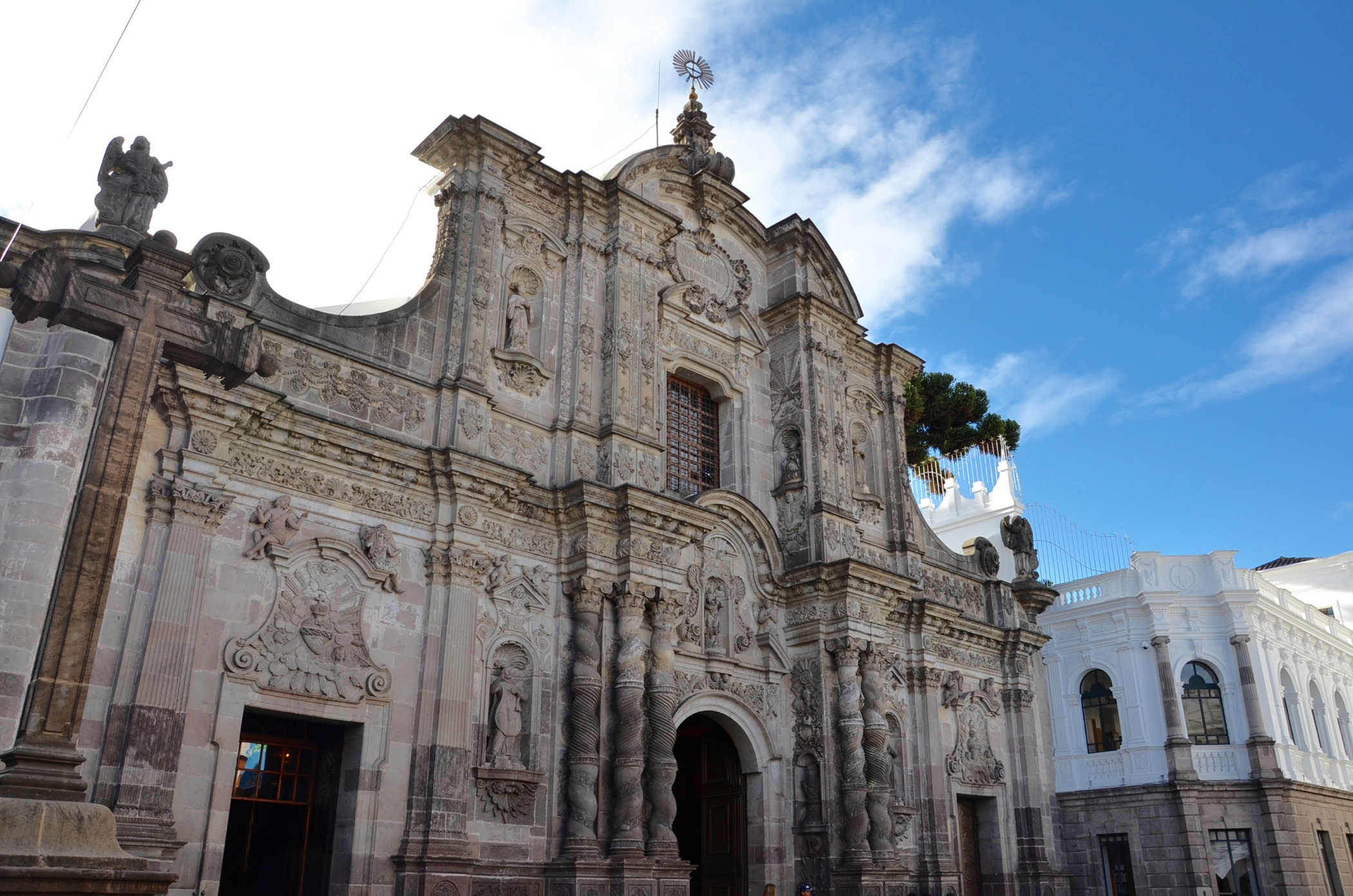 While the Baroque facade of this Jesuit church still leaves me unimpressed, its interior completely knocks me off the stool. I can not remember ever having seen such a golden church, except possibly in the Eternal City itself, in Rome. Altar, pulpit, columns and vaults, almost the entire nave is covered with a fine layer of gold, and casts the room in an almost unreal, shimmering light. If Scrooge McDuck were catholic, La Compañía would certainly be his sunday retreat. 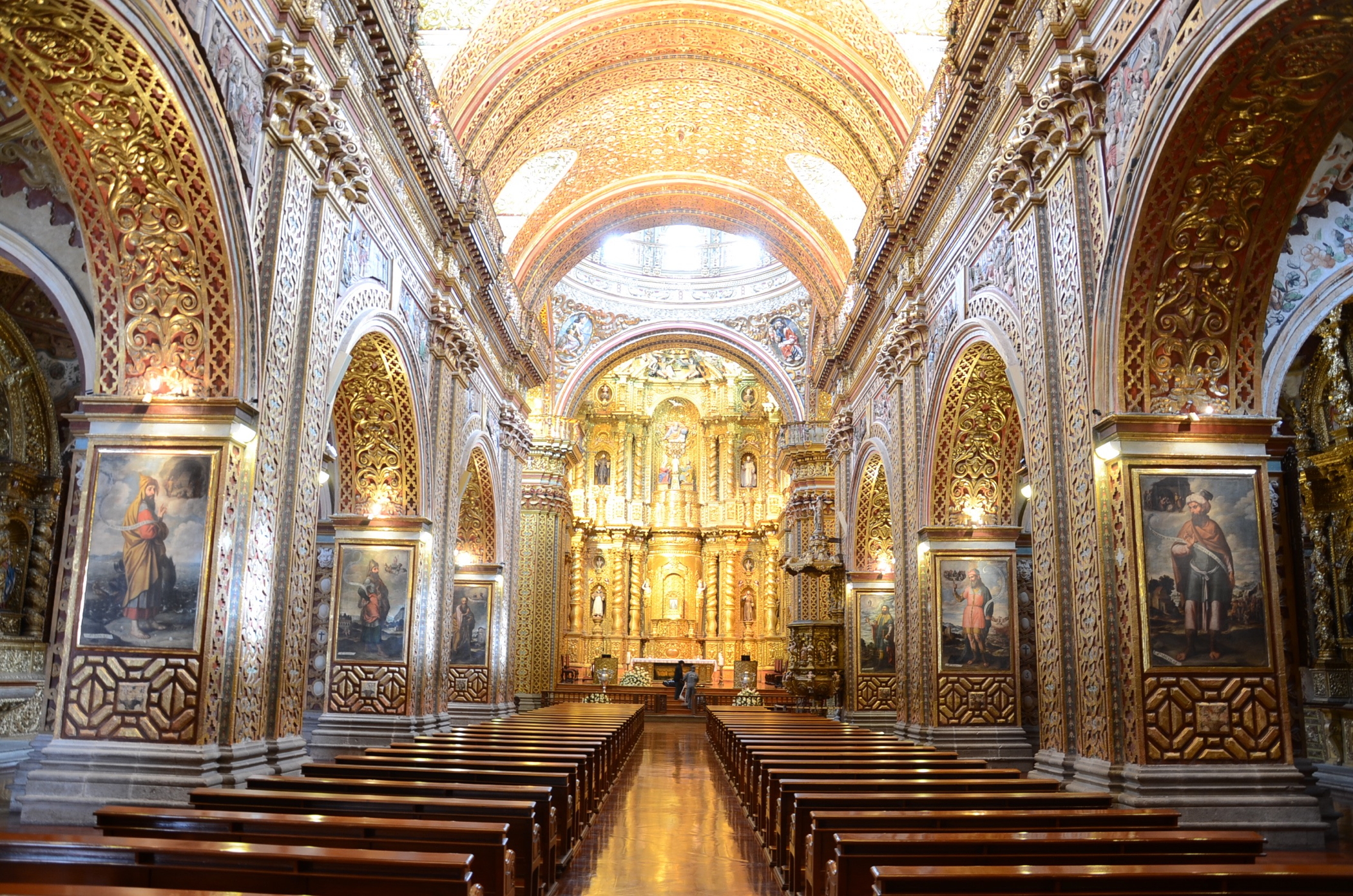 Gold everywhere: the nave of the Compañía de Jesús in Quitos old town.

Nevertheless I am happy to get out again and to smell fresh Andean wind instead of the incense-soaked haze of past centuries. After all,  Quito Old Town charm can be found right here, out in the street.

Some of those beautiful houses in old town quito.

Quito’s Centro Historico convinces with an incredibly photogenic mix of colonial and neo-classical buildings. There are subtle Spanish influences of the Mudejar style, with its Moorish and Gothic elements that makes it ever better. So it is no wonder that the one mansion is lovelier than the other, the one balcony even more beautifully decorated than the next and a buildings patina seems to tell more stories than the one of the neighboring house. 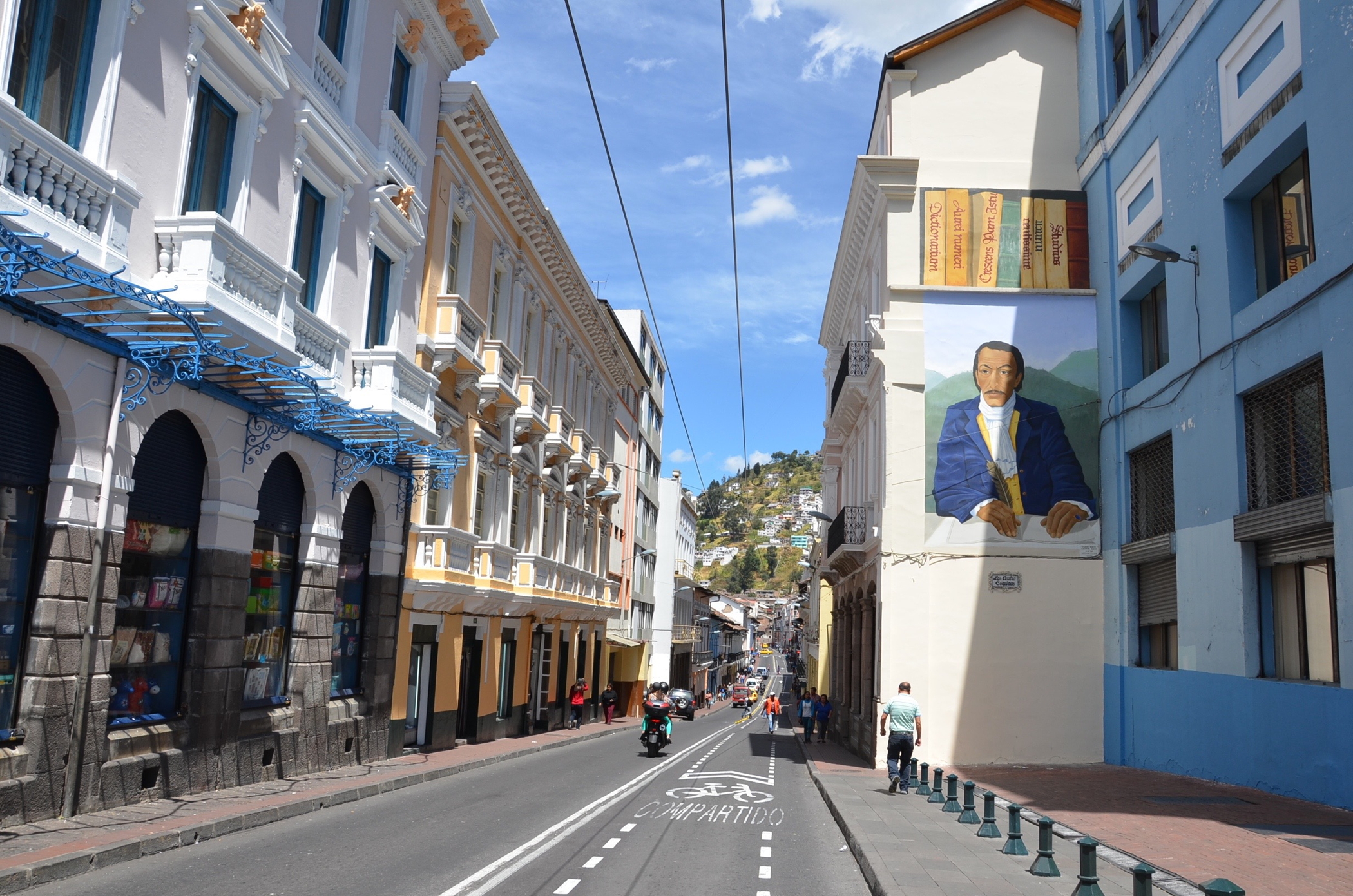 Via Guayaquil: it runs all the way through Old Town Quito from southeast to northwest.

One thing is certain: In old town Quito the next religious building is never far, but all the more impressive. Directly on the Plaza San Francisco there is the homonymous church, which is probably the oldest of the Spanish colonial period with the start of construction in 1534 and above all it convinces me with its ornate interior full of fine carvings, huge paintings and gold leaf work. 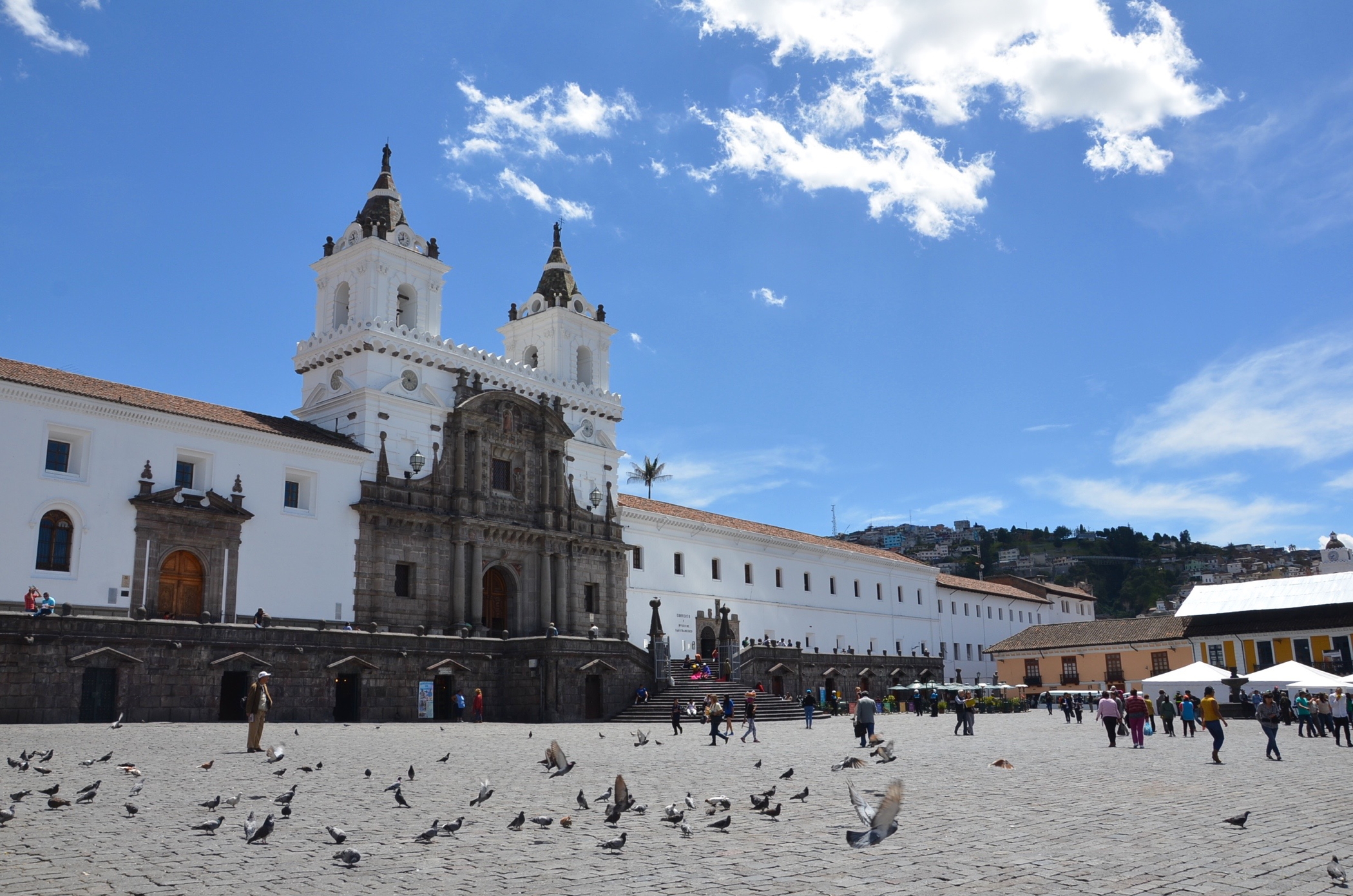 A few weeks ago the Pope was on old town Quito at Plaza San Francisco with its homonymous church.

To explore a city on nearly 3,000 meters on foot, is more exhausting than you might think (or well, than I did…) Nevertheless the historic center of Quito is packed with attractions, so you do not really have to walk much.

Finally, after my short stop inside the Church of San Francisco I join the locals on the benches and stairs around the spacious square. It seems to be equally popular with pigeons that spend their days here in the face of God. I might also get used to this sight. Or ever better, if all the cellular phones and bright yellow cabs would not be so omnipresent, one could almost believe to be right in the middle 16th century.

I was invited to Quito by Quito Turismo. Thank you! All opinions, exaggerations and bad jokes are my own.

Fancy a trip to old town Quito yourself? Any questions? Leave a comment!