Home Anekdotiques The Jordan experience: fairyland of the Arab World

The Jordan experience: fairyland of the Arab World

5 AM. My Jordan experience begins with a starry sky and a resounding “Allahu akbar!” The Imans’ morning call sounds so vividly through my hotel room window that I am almost inclined to convert to Islam spontaneously.

My first impression of the Jordanian capital Amman is great, although I’m still very tired. The city looks busy, clean and modern. Soon I begin to realize that in addition to the narrow alleys of the old town and the noisy bustle of the bazaar, there is another Amman: the Amman of the young generation. Where the country’s youth spend their days in hip bars, well dressed and equipped with the latest generation of smartphones. Here, the country’s future seems already in the works. 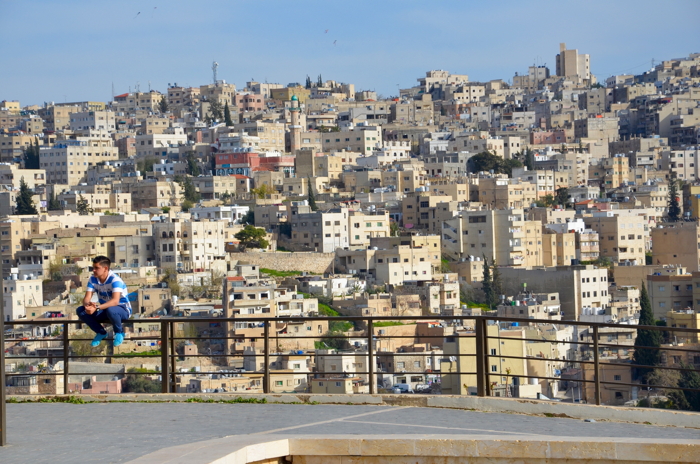 A Jordan experience: The capital city of Amman is build mostly on hills

Unfortunately, I don’t have much time to mix with the young and trendy in-crowd, because for the real Jordan experience you have to continue to more rural areas, to Petra, Wadi Rum and one of the most famous salt lakes in the world: the Dead Sea.

In fact, you don’t really know where to begin with sightseeing in Jordan. It’s nearly impossible to see and enjoy all highlights in one week. On the contrary, many attractions would actually even be worth a separate trip. The country is barely larger than Bavaria, but in contrast to the equivalent in Germany it still has a king. 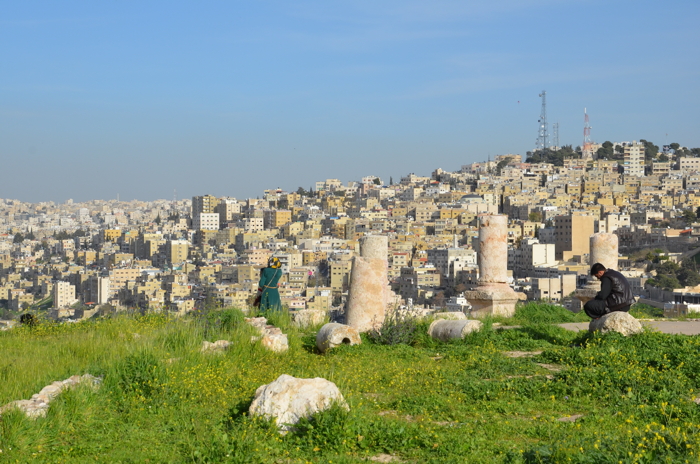 Where my Jordan experience started: the Citadel of Amman

Jordan: the “quiet house” of the region

His predecessor, the long-dead King Hussein, once described his kingdom as “a quiet house in a noisy neighbourhood”, a metaphor that is more relevant today than ever. In times when there is war and riots in almost all neighbouring countries from Israel to Syria, Iraq and Saudi Arabia, Jordan is an oasis of calm, a model for the entire region.

The constitutional monarchy has long since made peace with Israel and exercises tolerance also to other Middle Eastern states. This could be due to the cosmopolitanism of young King Abdullah or to the poster girl charm of his wife Queen Rania, who is treated like a pop star in Jordan.

A large share of the good reputation of the Jordanians has certainly also the special attitude of the people, says Ayman, our tour guide, while he cannot hold back a proud smile. When you meet people you do not know, says Ayman, Jordanians would first ask if he or she is Arab, then, if he or she is Jordanian and then, if he or she was a friend. Only after that you deal at all with the question of whether someone is Christian or Muslim. That may sound a bit like a platitude and yet this statement puts the soul of Jordanians in a nutshell: they are courteous, cosmopolitan and hospitable.

Petra: City in the rock

These characteristics cap it all off. Because I’m pretty sure, that no visitor to Jordan will be disappointed by what the kingdom has to offer, by the Jordan experience. The most famous sight is certainly the city of Petra, 200 kilometres south of Amman. Where the Nabataeans hewed a huge city in the rock 2,400 years ago, the young Harrison Ford aka Indiana Jones once celebrated the finale of the film of the same name, and made Petra famous at a stroke.

Especially impressing is the moment when you reach the famous Treasury after 20 minutes walk through the 1.5 km long Siq, a winding path surrounded by hundred meter high, red cliffs. Step by step you can see the Treasury coming closer through the narrow crevice. 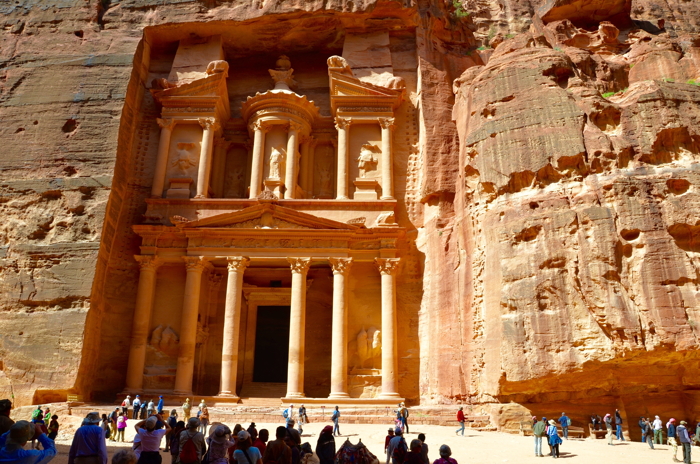 A Jordan experience: The famous treasury of Petra in Jordan

Petra, which literally means „rock“, glows depending on the time of day in other reds, so that the place is also worth a visit several times, in my case, three times in two days: in the afternoon, the evening and again the next morning.

No less impressive are the enchanting red desert landscapes of Wadi Rum, where I am overcome by the feeling that at any moment Lawrence of Arabia could ride past me on a dromedary. In spring 2015 its name is Jamal, an 11 year old camel whisperer who takes me on a ride through the vastness of Wadi Rum. Simply indescribably beautiful! 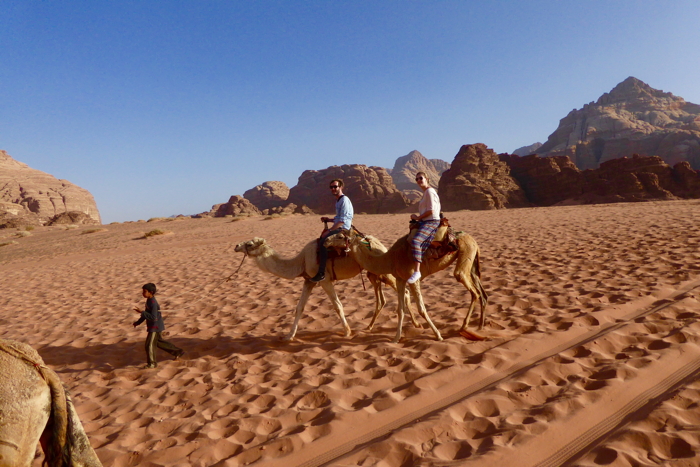 Jordan experience: Wadi Rum desert and a camel ride into the sunset

For the final act of the day, one should look for a nice place high up on a rock. You simply won’t forget the dramatic spectacle that will hold place at the horizon and the evening sky.

Mount Nebo: A Jordan experience in the footsteps of Moses

All those who are interested in religious sites, will definitely enjoy these two: the city of Madaba, which features the oldest mosaic map of the Holy Land and the nearby Mount Nebo, from where Moses according to the Bible has seen the Promised Land of Canaan. Today, in fact, if there is good weather one can even see Jerusalem in neighboring Israel. 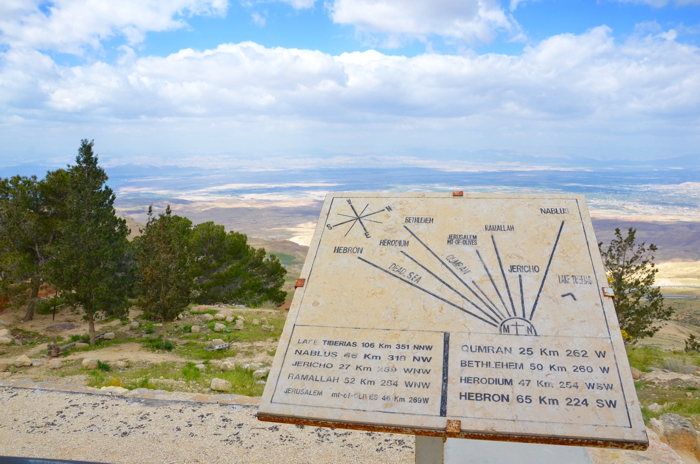 Jordan experience: Mount Nebo and Israel on the horizon

Dead Sea: Floating through the day

In between, there is the Dead Sea and thus the lowest point on earth. Here the landscape is less colorful. On the contrary, the sight gives the impression that someone had turned down the saturation. Asthmatics and beauty fanatics alike will definitely have good time down here, almost 400 meters below sea level, with the salty-dry air, eight per cent more oxygen and mud that smells like rotten eggs.

So what you actually do is, you apply this mud to your skin and then scrub it off again in an extensive procedure. Yeah, people do lots of things for their health these days.

However, most visitors come certainly for a dip in the Dead Sea or rather for floating, because due to the high salinity of 28-33 per cent diving is impossible. It’s better that way, because the salt water is almost acid-like. So getting a splash into your eyes is anything but fun. And I really know what I’m talking about, as I did it a couple of times. D’oh!

Those who are not interested in self-flagellation should also avoid to shave before the bath in the Dead Sea, whether man or woman. At least this is an experience I decided to skip.

Jerash: a stroll in Pompeii of the Middle East

Further north lies Jerash, the biggest surprise of my Jordan trip. The Roman ruins of Jerash could be called “Pompeii of the Middle East”, so wonderful are the Corinthian columns, stairs and forums that you may want to loose yourself wandering aimlessly around in this area. 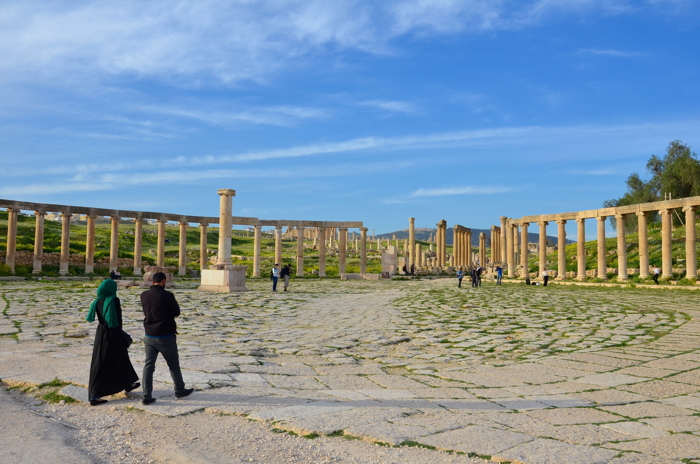 In better shape than Pompeji: the ancient city of Jerash is another great Jordan experience

In the Dana Biosphere Reserve, Jordan presents itself quite differently, namely as the Jordanian version of the Grand Canyon. A name that is especially popular with the locals. Nevertheless it is hardly surprising that this place mainly attracts hiking and climbing friends. 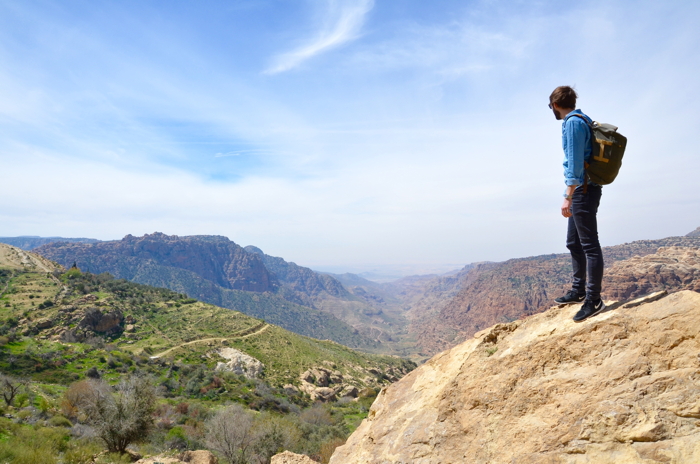 A Jordan experience: The Dana Biosphere Reserve is an area of staggering beauty and biodiversity

Anyone interested in botany should take a long walk accompanied by a local guide, which is another reason why this is a fun way of exploring Dana, because the guides used to share their enormous enthusiasm for everything related to botany, almost as if they were on first-name basis with every single flower.

And then there’s something that lies closest to the Jordanian heart: their traditions, especially those of the Bedouins that until today actually live in the wadis, even if they might not change their camp site that often as in the old days and even if the one or the other might already have switched from camel on Jeep. 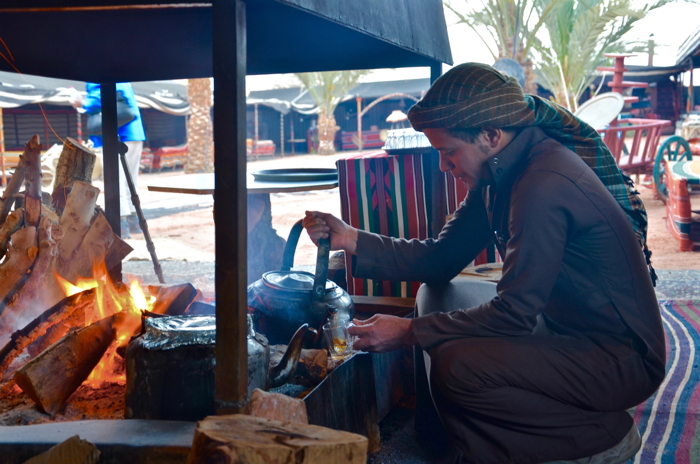 The real Jordan experience: At a sage among the Bedouins of Wadi Rum

Amman, city on the move

Back in Amman. During an evening stroll a pleasant lukewarm wind blows through the winding streets. I realize that the city has already shaken off its dusty image of a tradition-conscious metropolis, even tough it continues to disappear under a layer of fine sandy dust in summer. 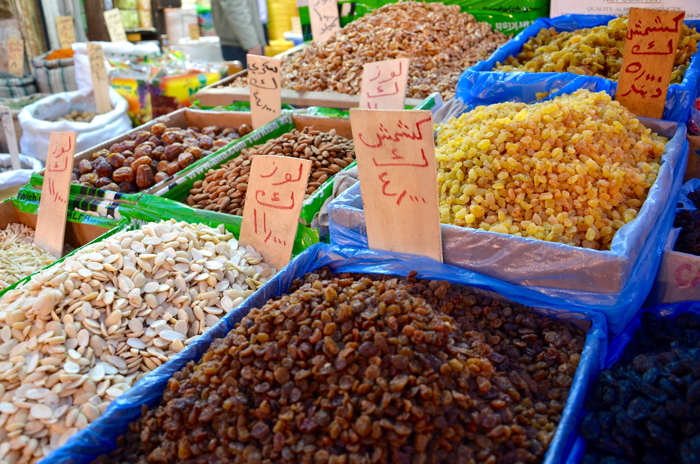 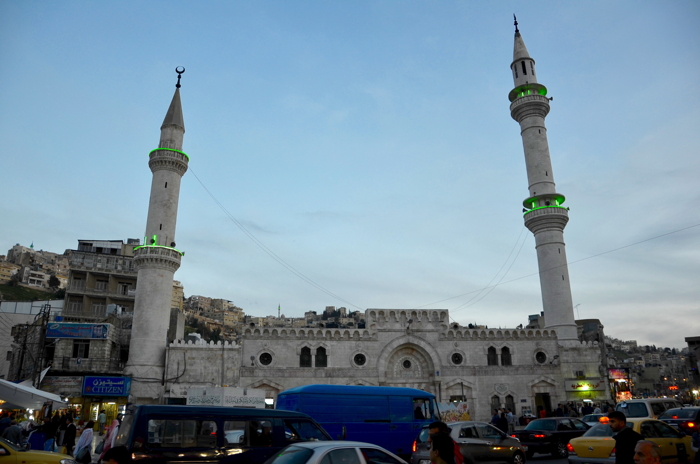 A Jordan experience: The mosque at the bazaar in Amman at the call for evening prayer

The Kingdom of Jordan keeps looking forward, at least as much as one can do in a disordered region like this. The capital stands emblematic of a country caught between past and future, Bedouins and modern times, camel drivers and iPhone lovers. Nevertheless, tradition is part of the modern, especially in such a predominantly Muslim area.

The Jordan of today is modern and future-oriented, without ignoring culture and religion. On the contrary, the Imams prayer calls sound more insistent than ever. Especially at 5 in the morning.

Planning a trip? Check out my favorite Jordan travel guides:

There are tons of books about Jordan. The one I liked the most on my trip was the Lonely Planet Jordan that contains lots of history and background information to get you started, but also all the hard facts that are always up to date with the latest edition. Also have a look at the Rough Guide to Jordan and the best book so far about Lawrence of Arabia.