Christkindlesmarkt & more: Lose yourself in Nuremberg at Christmas time

The Nuremberg Christkindlesmarkt is one of most beautiful German Christmas markets and probably the most famous one. Every December the Franconian city is almost bursting with Christmas spirit. But there is more then mulled-wine, Elisen-Gingerbread and Nuremberg roast sausages. Let me take you to an enchanting Nuremberg at Christmas time.

All you need for a first impression of Nuremberg Christkindlesmarkt is to stand on the main market and close your eyes for a brief moment. One of our senses is easily sufficient to dive into Christmas wonderland with a single deep breath.

Do you remember the rat in Pixar’s Ratatouille, where enchanted scents float around its nose like in a perfume shop? It’s just like that, but with different smells of food. And when you open your eyes again, lights are blinking everywhere like crazy. 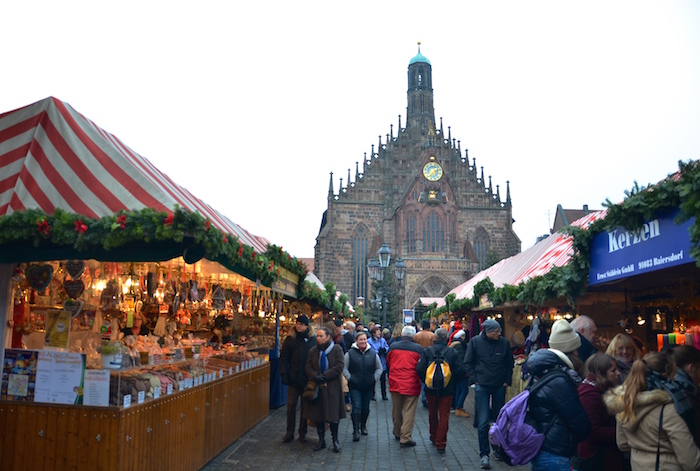 The Christkindlesmarkt – loved by young and old

In this surrounding you can easily feel like a child again. There are 180 traditional red and white decorated wooden stalls, bright lights garlands everywhere and an old carousel that moves so elated while you can hear the bells of the old stagecoach from afar.

In the weeks before Christmas Nuremberg looks a bit like a children’s paradise for the young and the old alike, because in addition to cotton candy, baked apples and Christkindles Children Punch for the little ones, there is plenty more for the adults among us, especially the famous hot rum punch called Feuerzangenbowle (literally “fire tongs punch”), that attracts hundreds of sociable people every evening.

But there is more to it than that: the city of Nürnberg has more to offer that makes it worth a visit especially in the Christmas season. In the following, I will present my personal highlights of Nuremberg.

Nuremberg Christkind – a symbol for the city

The name Christkindlesmarkt comes from the Christkind, that has been chosen every two years by an election process since 1969. In fact, this is not a well-payed job as you might think, on the contrary, the 16-19 year old girl is doing the job for reasons of prestige or rather from honourable motives and therefore unpaid. 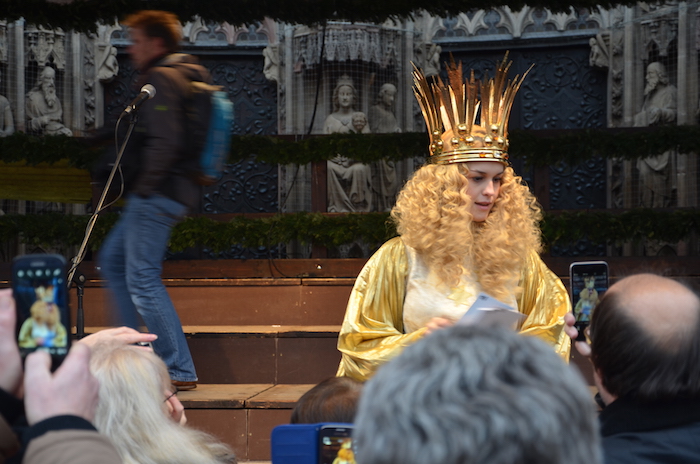 My tip: The Nuremberg Christkind opens the Christkindlesmarkt each year on Friday before the first Sunday in Advent from the balcony of the Church of our Lady at the Main Market Square with a famous prologue.

„You men and women, who once yourselves were children,
You little ones, life’s journey just beginning,
Each and all, who troubled tomorrow, are full of cheer today,
Pray listen to what Christkind has come to say!“

The Food – hearty and delicious

One thing you will notice right away: the people of Franconia have a very hearty cuisine. So for anyone who wants to lose weight, Nuremberg is certainly the wrong place. One dish you definitely have to try when visiting the Nuremberg Christkindlesmarkt is “Drei im Weggla”, three Nuremberg Bratwurst sausages consumed in a bun and garnished with mustard and horseradish sauce. 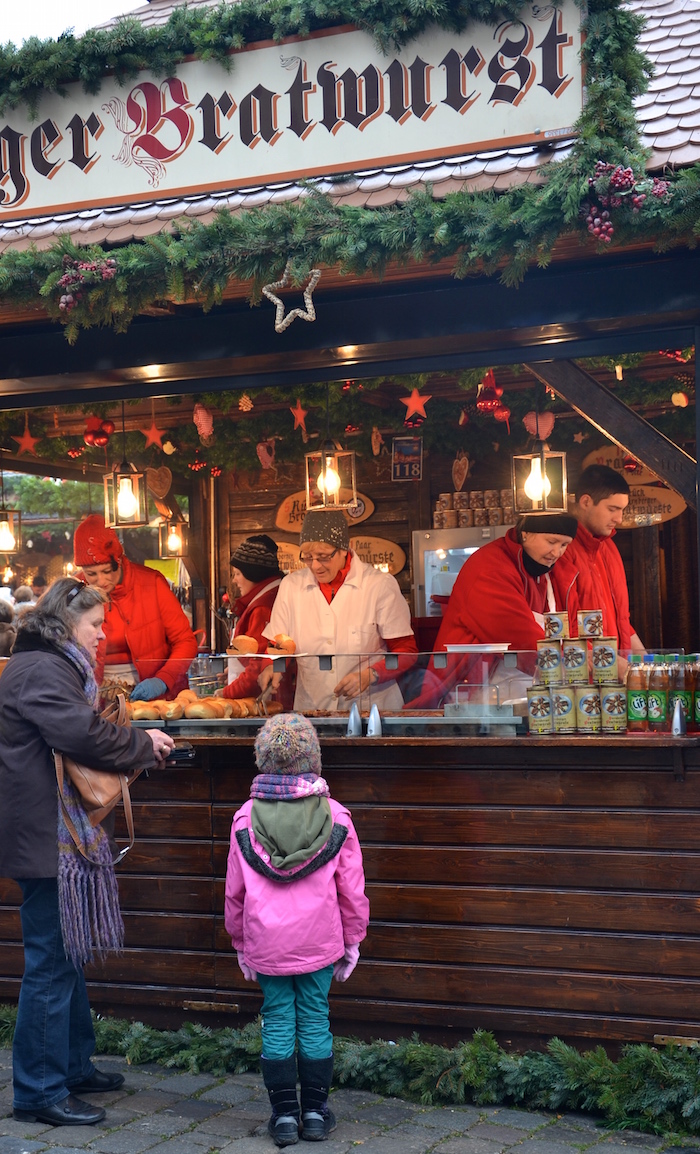 A kid waiting for an original Nuremberg Bratwurst at Christkindlesmarkt 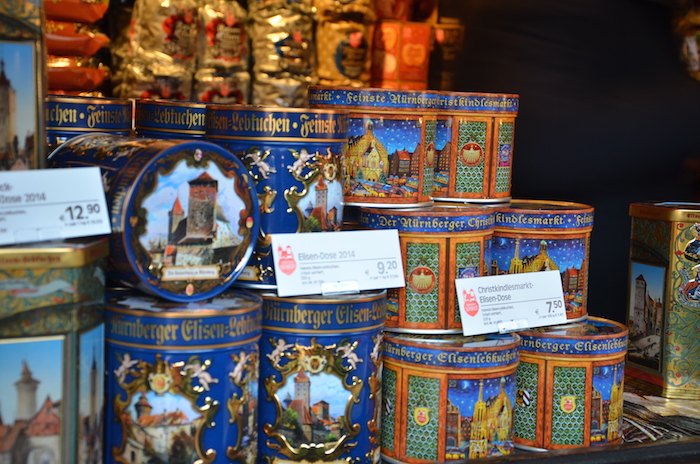 Better also don’t miss the famous Elisen Gingerbread, which is available here on every second market stall or at Lebkuchen Schmidt directly on the main market.

And I can only recommend: Buy some gingerbread! Eat it and learn to love it! My first Elisen Gingerbread this year was a genuine revelation. Whoever first had the idea for this delicacy, I will worship him forever. 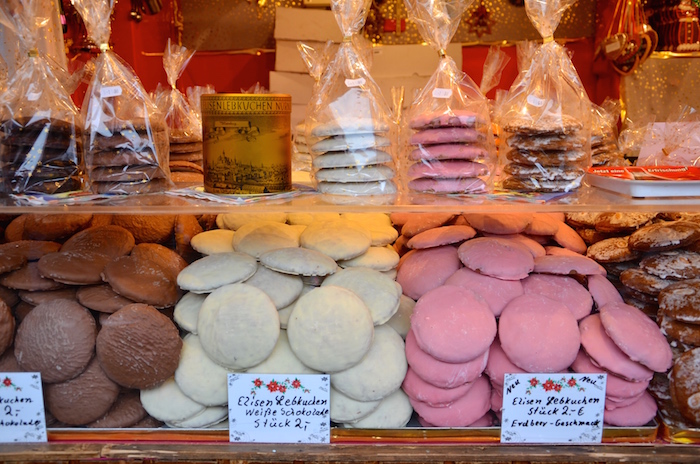 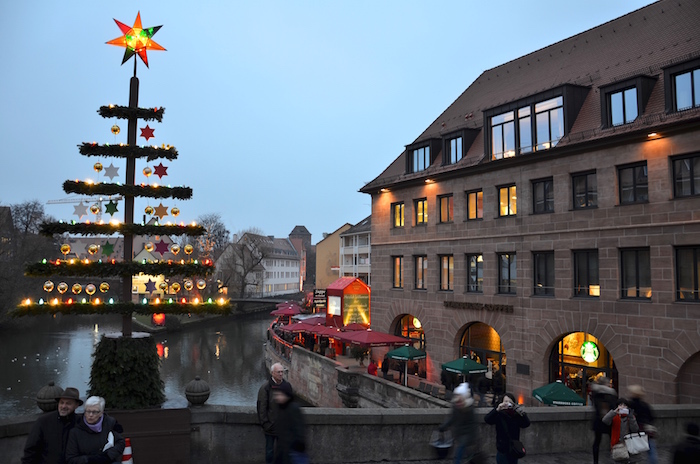 The best thing is to enjoy your gingerbread with a cup of hot mulled wine, that can be mixed with a sip of rum or amaretto by telling the waiter “Mit Schuss” which means “With a shot”. Or even better, treat yourself with a glass of the queen of all the winter drinks: Feuerzangenbowle, the hot rum punch. It’s made of hot red wine, spices, lemon, orange peel and a good portion of rum. Sounds tasty eh?

My tip: The supposedly largest Feuerzangenbowle of the world can be found at the Feuerzangenbowle village on the edge of the Nuremberg Christkindlesmarkt at the Fleischbrücke directly at the Pegnitz river. In any case, it is one of the most delicious, I can tell you in advance.

These so called “Zwetschgenmännla” are sold at the Christkindlesmarkt

One more thing that is typical for Nuremberg but not that tasty is Zwetschgenmännla, a small figure whose arms and legs are made of dried prunes threaded on a wire. While the body is made of dried figs and the head is a painted walnut, they are dressed as men and women, chimney sweeps, snowboarder, golf players or other professions. Oh and if you speak a little German try the correct pronunciation in Franconian that is “Närmbercher Zwedschgermennla”. Well, you should better start practicing now …

My personal highlight of the Franconian cuisine is called Schäufele, which is not available at the Christkindlesmarkt, but in most any well-bourgeois restaurant. It’s the blade-shaped portion of the pork shoulder. If perfectly cooked the meat is wonderfully tender and juicy. It comes with red or blue cabbage and a potato dumpling with gravy.

The old stagecoach – Let’s go for a Christmas ride!

Nostalgia meets cosiness when you sit in one of two old yellow stagecoaches for a 15 minute journey back in time. The route either goes once around the Christkindlesmarkt or through the Weißgerbergasse, the oldest street in Nuremberg (see below). 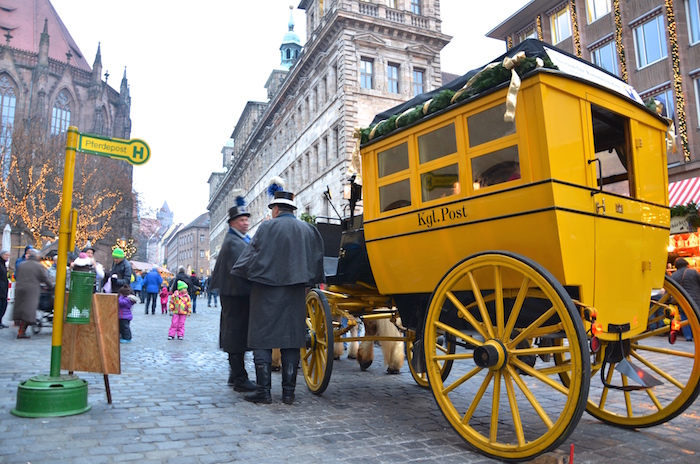 While Walter coordinates the trips, driver Heinz takes care of horses at Christkindlesmarkt

Here you can sit relaxed in the back of the car. Who knows, maybe if you ask Heinz, the coachman, quite nice and friendly, maybe you are even allowed to sit with him in the front while enjoying the joyful sound of the bells and the clatter of the hooves. The good thing is: it is only 4 Euros and definitely worth the fun.

Nuremberg’s Christmas Market of Sister Cities – from Gera to Glasgow

Something different: next to the Christkindlesmarkt there is the Christmas market of the sister cities

Not far from the Christkindlesmarkt, on the other side of the town hall, there is the Christmas market of the sister cities. Here there are countless market stalls of sister cities of Nuremberg like Skopje, Atlanta, Gera or Glasgow. So after enjoying all the Franconian delicacies you could enjoy a Hot Toddy for instance, one in Scotland infamous hot whiskey.

Albrecht Dürer – the famous son of the city

Certainly, Nuremberg has more than one famous son or daughter, but by far the best known is probably the painter Albrecht Dürer. His home and workplace in Nuremberg was built in 1420 and still looks pretty not only from the outside, because its also home to a museum.

The Weißgerbergasse – Walking through another century

No Christkindlesmarkt visitor should miss the Weißgerbergasse, one of the oldest streets in Nuremberg

The Weißgerbergasse is definitely worth a visit for those who love old craftworkers houses. Altough very few places in town survived after the war, this is one of the few streets that is quite intact with its cobblestone walkway and Middle Ages buildings that are still intact and beautifully restored or painted. Visiting takes you back in time.

My tip: If you go straight through the intersection at the south end of the road, you will reach a chain bridge called Kettensteg, the oldest preserved iron chain bridge in continental Europe. 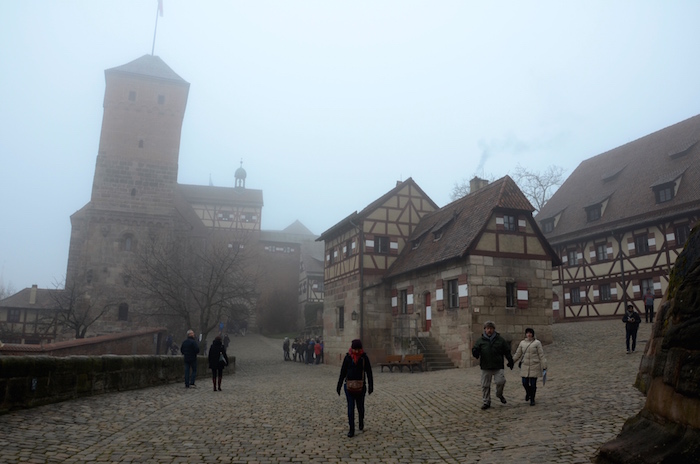 A short walk from Christkindlesmarkt: Low-hanging fog makes the perfect mood for the Imperial Castle of Nuremberg 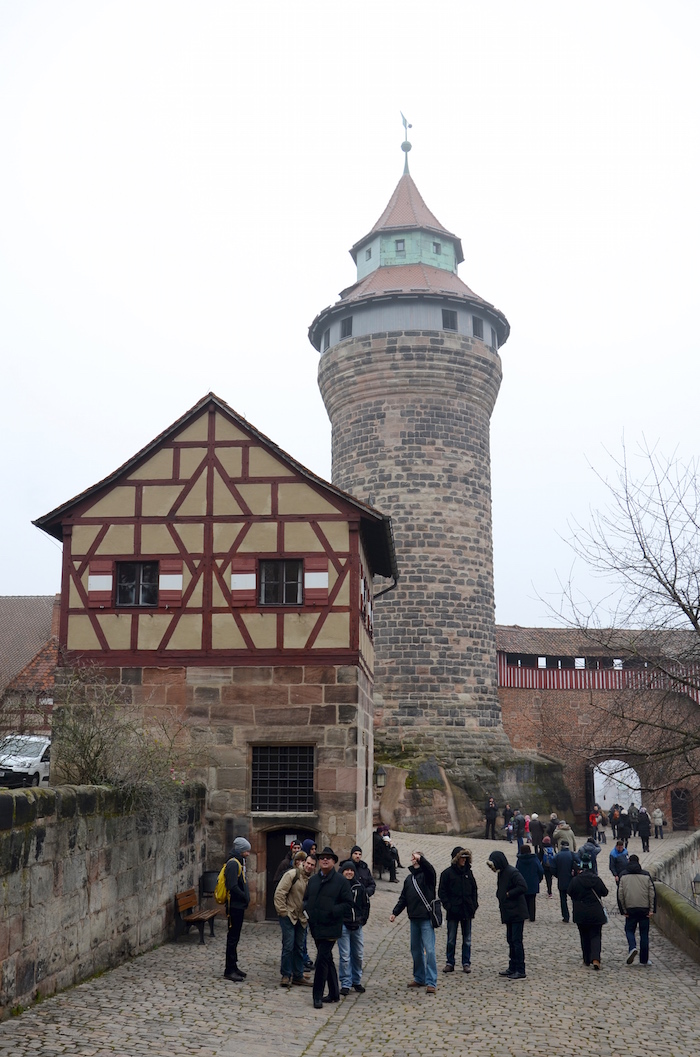 Only 10 minutes from Christkindlesmarkt: the famous Nuremberg castle.

If you walk from the Christkindlesmarkt past the town hall and up the castle road, you will easily reach the Imperial Castle of Nuremberg. This is one of the imperial palaces of the Middle Ages and perched high above the city, which it once gave the name.

Today it houses a museum where you can spend about three hours. You can not only visit the venerable Emperor rooms at Palas, but also learn a lot about the former ruler ship and the moving story of the Imperial Castle – not least because of the devastating bombing in WW2. The cost of Palas with Double Chapel, Deep Well, Sinwell Tower and Nuremberg Castle Museum is 7 Euro. 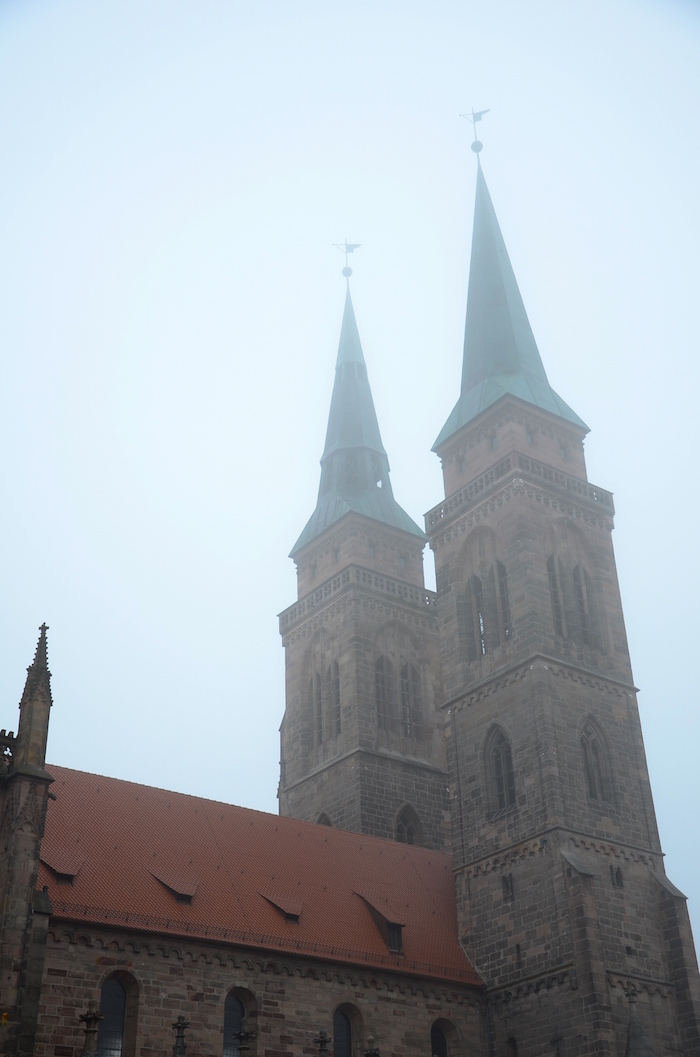 At the tour of St. Sebaldus Church one can climb up high in one of the towers for a good view of Christkindlesmarkt.

If you are interested in churches or just in stunning views from the top, the St. Sebaldus Church opposite is the Nuremberg City Hall offers a really informative tour that I can only recommend.

It takes about one and a half hours, is led by a lovely elderly lady and costs only three euros that are very well spent. A special highlight is the climb to the top of one of the church towers from where you have a stunning view of the city of Nuremberg and especially the hustle and bustle of the Christkindlesmarkt. 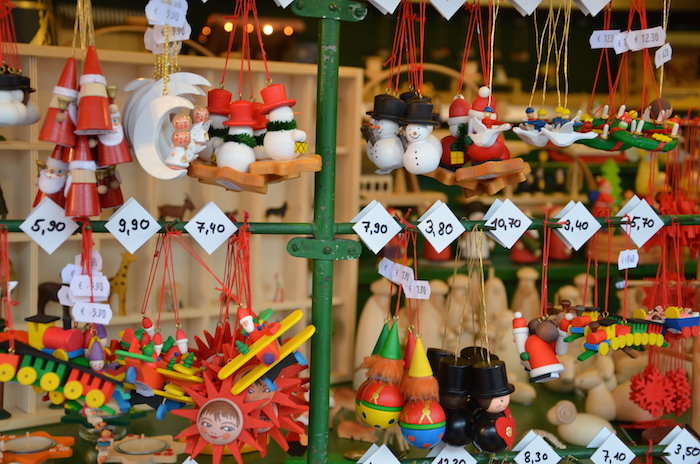 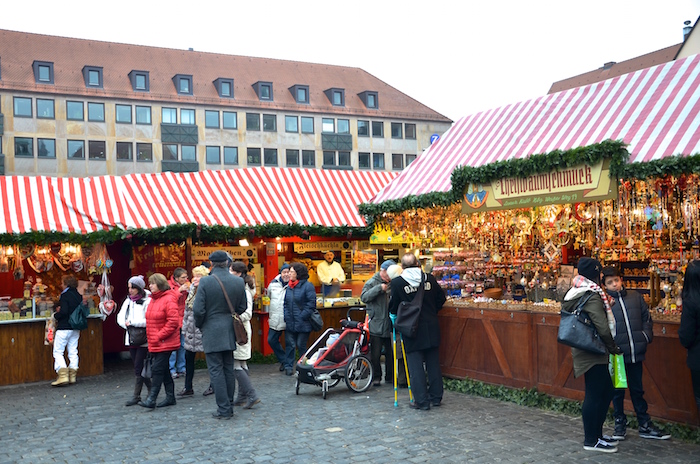 Hard Facts for your visit to Nuremberg:

Stagecoach tour around the market: The stagecoach departs from the stop north of the Beautiful Fountain daily during the Christkindlesmarkt from 1 p.m. to 7 p.m. – 10 minutes cost 4 Euros for an adult, 2.50 Euros for children

Schäufele (Crispy roast shoulder of pork with potato dumpling and gravy): about 11, – Euros

Mulled wine at Christkindlesmarkt: about 3,- Euros per cup

Planning a trip? Check out my favorite Nürnberg travel guides:

A very good round-up to the region of Bavaria is the Lonely Planet Munich, Bavaria and the Black Forest. If you are about to spend more time in Deutschland, the Lonely Planet Germany and the Fodor’s Germany is a good deal.

Where to stay in Nuremberg:

When it comes to best hotels in Nuremberg, I can absolutely recommend the newly renovated Sorat Hotel Saxx Nürnberg, that has the perfect location at Hauptmarkt, where in winter time Christkindlesmarkt takes place. Check the best rates on Booking.com.

Anekdotique was a guest of Nuremberg Convention and Tourist Office. Thank you! All opinions, exaggerations and bad jokes are my own.